Not a translation but a transdialection.

Welcome to our tenth website dedicated to the International Authorized Version. This website was launched Sunday, October 27, 2013.

We have developed the “psychological technology” that allows us to assert with absolute certainty that the true text of the Bible in the original languages is the:

Note that the NIV (New International Version) and the NKJV (New King James Version) do not use the MT10-TR-CSR10.  They use a different text.  They are “mixed translations”; that is, they are translations of a text that is a mixture of the MT10-TR-CSR10 and purely human, uninspired writings, which we, collectively (together), refer to as the XT0-XR-X0 text.  Also, unlike the makers of the NIV and NKJV, we provide all of the facts and all of the details behind all original language texts and all English translations.  For every day spent by the makers of the NIV and NKJV, we spent an entire year!

Scientific, scholastic, and technical information will be found via our Biblical Textual Calculus website, which is also a portal to our other (relevant) websites.

We are the guardian in the matter of the identification of the true text of the Bible in the original languages and in the English language and we are prepared to defend this powerful claim.

The true text of the Bible in the original languages is the:

This is the original languages text of the King James Bible and the International Authorized Version.

The IAV (International Authorized Version) is a language update of the King James Bible in the following ways: 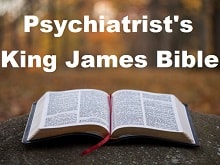